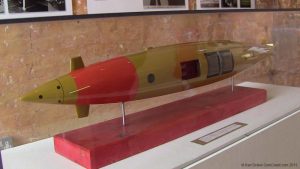 The Brennan torpedo was a torpedo patented by Irish-born Australian inventor Louis Brennan in 1877. It was propelled by two contra-rotating propellors that were spun by rapidly pulling out wires from drums wound inside the torpedo. Differential speed on the wires connected to the shore station allowed the torpedo to be guided to its target, up to 2,000 yards (1,800 m) away, at speeds of up to 27 knots (31 mph).

The Brennan torpedo is often claimed as the world’s first guided missile, but guided torpedoes invented by John Ericsson, John Louis Lay, and Victor von Scheliha all predate it; however, Brennan’s torpedo was much simpler in its concept and worked over an acceptable range at a satisfactory speed so it might be more accurate to call it “the world’s first practical guided missile”. 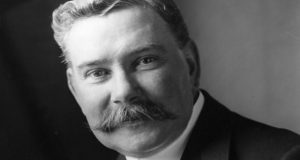 Brennan was born in Castlebar, Ireland, and moved to Melbourne, Australia in 1861 with his parents. He started his career as a watchmaker and a few years later was articled to Alexander Kennedy Smith, a renowned civil and
mechanical engineer of the period. Brennan invented the idea of a steerable torpedo in 1874, from observing that if a thread is pulled on a reel at an angle with suitable leverage, the reel will move away from the thread side. Brennan spent some years working out his invention, and received a grant of £700 from the Victorian government towards his expenses. He patented the Brennan Torpedo in 1877. This idea was trialled here at Camden Fort Meagher.

Brennan went to England in 1880 and brought his invention before the War Office. Sir Andrew Clarke alerted the authorities to the possibilities of the torpedo if used in the defence of harbours and channels, and the patent was eventually bought for a sum believed to be more than £100,000. In 1887 Brennan was appointed superintendent of the Brennan torpedo factory, and was consulting engineer 1896–1907. He did much work on a monorail locomotive which was kept upright by a
gyrostat. In 1903 he patented a gyroscopically-balanced monorail system that he designed for military use; he successfully demonstrated the system in November 1909, at Gillingham, England, but fears that the gyroscopes might fail prevented adoption of the system for widespread use.

From 1916 to 1919 Brennan served in the munitions inventions department. From 1919 to 1926 he was engaged by the air ministry in aircraft research work at the Royal Aircraft Establishment, Farnborough,and gave much time to the invention of a helicopter. The government spent a large sum of money on it, but in 1926 the air ministry gave up working on it, much to Brennan’s disappointment. In January 1932 he was knocked down by a car at Montreux, Switzerland,
and died on 17 January 1932. He had married Anna Quinn (died 1931) on 10 September 1892. He was survived by a son and a daughter. Brennan was created a Companion of the Order of the Bath in 1892, and was foundation member of the National Academy of Ireland in 1922. Brennan was buried at St. Mary’s Roman Catholic Cemetery, Kensal Green, London in an unmarked plot numbered 2454 that is opposite the Chapel record office.

A Cork County Council project in association with Rescue Camden.